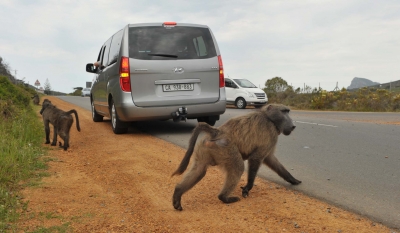 An overarching management plan for baboons on the southern Cape Peninsula is in process. A framework document - that includes topics such as training, management, legislation and occupational health and safety - will be in process during 2018.

Against this backdrop and until this document exists, the management guidelines - represented by process flow diagrams - have been released.

The guidelines (protocols) have been created for baboon management at the interface of urban edge of the City of Cape Town by baboon rangers.

The purpose of these guidelines is to mitigate the damage and risk on public safety caused by individual baboons, while encouraging socially responsible behavior by residents in baboon-affected areas.

The guidelines - as represented by management flow diagrams - were released by the Baboon Technical Team on 12 February, 2018. The guidelines reflect the methodology or thought processes which underlie daily baboon management processes on the interface of the urban edge of the City of Cape Town.

The downloadable version, below, is regarded as the current working guideline for baboon management on the southern Cape Peninsula: