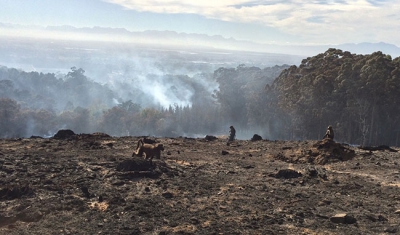 The Baboon Technical Team has issued a Situation Report Update on the Northern Troops as @ 17h00, Thursday 5 March, 2015.

Please find a report on baboon injuries in the Tokai Forest.

During an initial assessment of the Tokai Troop this morning, it was found that eight of the 73 baboons in the troop – had injuries which appear to be inflicted by fire.

The injuries to an adult female baboon were so severe that the BTT, assisted by animal welfare representatives and two veterinarians, chose to dart and euthanase the animal on humanitarian grounds this morning.

We would like to thank the BTT members, baboon rangers, animal welfare professionals and veterinarians for their dedication and professionalism during this distressing time.

The Report With The Facts Is As Follows

The Report With The Facts Is As Follows

The BTT confirm the following situation in the Tokai Troop @ Thursday March 5 @ 17h00:

The BTT team, veterninarians and animal welfare professionals left the site in the Tokai Forest on account of poor visibility and smoky conditions at 17h30.  The team will resume their work at 6am on Friday morning, March 6.