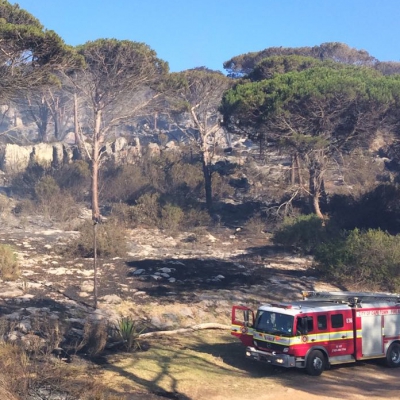 All the troops were located by baboon rangers at 06h00 this morning. This report covers two baboon troops

* The Da Gama Troop had split into two troops, but the rangers are spent the morning gathering the troop to the vicinity of Jack's Shop.

Baboon rangers have spotted two juvenile baboons that seem to have burn wounds. One is limping, whilst they other juvenile baboon has patches on his coat. We are not sure of the full extent of the injuries, but are monitoring the situation and will call in a veterinarian.

* The Waterfall Troop is up the cliff above the Admiral Footsteps, but there is still a fire burning below the South African Navy Signal School

Having spent the morning in good weather the baboon rangers have been able to evaluate the damage.

The Da Gama Baboon Troops are estimated to have lost 80% of their home range to the Ocean View Fire.

The better known areas - that have burnt - in the Da Gama Baboon Troop home range - include the following areas:
* Area surrounding the stables,
* Area surrounding Jack's shop;
* In front and behind Khayelitsha;
* Around Lewis Gay Dam;
* Around Kleinplaas Dam;
* In front of Maylands sleep site,
* Elsie's River Valley,
* Area behind 16th Avenue;
* All around the Scala Barracks, SA Navy.

News flash: There are no injuries in the Slangkop or Waterfall Baboon Troops.

Baboon Management – Who is the BTT?

Representatives from animal welfare organisations, independent animal welfare specialists and members of the University of Cape Town Baboon Research Unit are invited to monthly meetings to inform decisions on baboon management in the southern Cape Peninsula.

The BTT meet quarterly with members of the public through the Baboon Liaison Group (BLG).