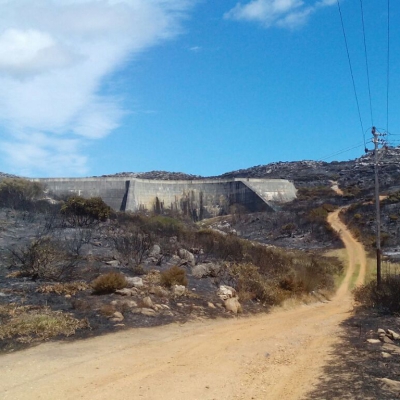 INTRODUCTION
Residents urged not to feed baboons in the wake of the recent fires.

According to CapeNature, spot fines of R 2 500 for a first offence - leading up to a maximum of R 40 000 or one year in jail (or both) for a second offence - are the statutory penalties for anyone caught feeding baboons in the Western Cape.

Below is a post-fire assessment report that implores residents to assist them in maintaining the current policy whereby baboon troops are kept ‘wild and safe’.

The assessment is that there is plenty of food and water, at this time, for all baboon troops around the city.

The reasons for not feeding baboons are as follows:
(1) The feeding of baboons in a built-up area or public place is prohibited by law. (See fines below).
(2) Feeding baboons in gardens, natural areas or along the road with vegetables will encourage baboons to raid homes.
(3) It is vitally important to encourage baboon troops to continue foraging out of town in the unburnt zones.
(4) Following a fire, baboons feed on seeds (eg. conebush Leucadendron spp.) and find it much easier to detect bulbs in the fynbos. Teams on the ground indicate that fresh green shoots - that are loved by baboons - are already popping up in the home range of the Da Gama Troop.

“It is absolutely critical that residents do not randomly feed baboons in their gardens, natural areas or along the road with vegetables, fruits or any food”, says Julia Wood, Biodiversity Management, Environmental Resource Management Department, City of Cape Town.

“It is also vitally important to encourage the baboons to continue foraging out of town in the unburnt zones. We need to keep our baboon troops wild and safe”, she says.

Julia Wood (MSc Botany) from the Biodiversity Management Department, City of Cape Town and a team of senior fynbos experts have made the following assessments:

The various fires in the Somerset West area and in the Southern Cape Peninsula will assist in conserving fynbos biodiversity in the long term for the following reasons:

1) The fynbos vegetation requires fire to regenerate from underground storage organs and seeds. Without fire these becomes moribund with some species can becoming locally extinct. For fynbos on the Cape Peninsula and on the mountains in Somerset West an average fire interval of 15 years is ideal (but 8 to 30 years is acceptable).

2) The vegetation and the animals are adapted to summer fires, so the season was also ideal (January to March) before bulbs emerge in autumn and the birds start nesting.

3) Animals survive fire by fleeing, hiding in holes (or pockets of unburnt veld) or through the next generation emerging from eggs after the fire, much like the plants do with their seeds. Those that perish become food for other animals, for example the baboons. Baboons from the Da Gama Troop eating large – apparently dead - insects caught in the fire have been sighted by the baboon ranger teams on the ground.

4) In all the fires this month, there were only a few animal deaths reported. One grysbok got trapped by a fence and could not run away, plus some snakes and tortoises. Adult tortoises do often die in fynbos fires as this is part of their life cycle. However, their eggs are adapted to hatch after a fire.

5) During drought cycles, fires tend to be more frequent and more extensive. This is a natural phenomenon and one that we should be prepared for. Wet cycles see less fires.
6) The fire season is not over. There are two more months when fires will still occurring and residents are requested to be vigilant.

Fires in thickets of invasive flora could therefore cause local extinction of species and could be prone to erosion during the first winter season and may require rehabilitation. In these circumstances, there could be higher animal deaths as animals that normally hide, can’t survive.

Three of the eleven managed baboon troops on the peninsula were in the vicinity of the Ocean View and Simon’s Town Fires (11-12 January 2017).

After the fire, the troop moved across the burnt zone of vegetation to the south of Kleinplaas Dam where vegetation was unaffected by the fire. This places the troop well away from the residential areas of Da Gama and Welcome Glen and they currently have access to plenty of food and water.

“These two baboons are being monitored daily in the field by a team that includes City of Cape Town veterinarian, Dr Dorothy Breed. Dr Breed has assessed that removing the juvenile baboons from their mothers and the troop should only be done if it is seen that the baboon is not coping and should be regarded as a last resort”, says Wood.

The team assessing the situation has indicated that past experience has shown that the juveniles have a good chance of healing and remaining wild baboons if humans do not interfere.

If the juveniles are removed, the wounds may take more than five days to heal. There is every possibility that after this time the juveniles will be un-releasable’ as they are still very young and will become habituated very easily.

The juvenile baboon with a burnt hand is currently being protected by the alpha male of the Da Gama Troop and her mother.

“Removing the juvenile from these large baboons will be very difficult and potentially dangerous, if even possible at all. So we have to be very sure that interfering is the right thing to do before embarking on this strategy”, adds Wood.

The Ocean View Fire started in the home range of the Slangkop Troop and it is estimated that the fire burnt 40% of the vegetation in their home range.
Prevailing north-westerly winds on the day of the fire blew the flames away from the troop. Baboon rangers moved the troop northwards into the valley above the Kompaniestuin Estate on the Kommetjie Road where they remained safe during the fire.

No injuries were recorded in the Slangkop Troop and they have good access to food and water at this time.

Any baboon-related incidents can be reported to the Baboon Helpline / Hotline on 071 588 6540.

The team from Helderberg Nature Reserve believe there are three troops on the Helderberg mountain range whose areas have been affected significantly. These troops have never been monitored officially. As such, little is known about their movements or troop dynamics.

Based on 2009 and 2011 wildfires in this area, the baboons in the Helderberg appear to be able to adapt well and continue to sustain themselves after large wildfire events.

At this stage, the Helderberg Nature Reserve remains unburned and there are a number of pockets, mainly in the ravines that are unburned. These should be sufficient refuge for all baboon troops in this region.

Baboons are a protected species in the Western Cape, in terms of the CapeNature Conservation Laws Amendment Act, 2000, Ordinance 19 of 1974.

Helene van der Westhuizen from CapeNature has confirmed that the spot fine for feeding baboons (first offence) in the Western Cape is R2 500.