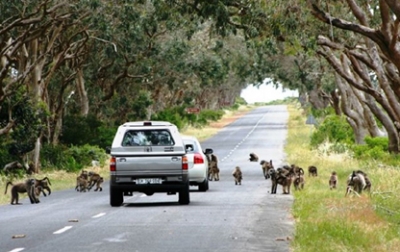 Over a period of four weeks before 8 January, 2018, a dispersing and raiding adult male baboon went on 37 raids into suburban Tokai.

Eight of which were assertive, including 20 occupied house raids and one incident of threatening behaviour.

​This adult male baboon grew up in the Slangkop Troop, and after dispersing, had become a member of the Tokai/ Zwaanswyk Troop.​

The application was approved by CapeNature and the adult male baboon was euthanased by the Baboon Technical Team on Monday 8 January, 2018.

Not all residents are aware of the backdrop to baboon management, which includes complex issues, protocols and substantial baboon stakeholder involvement.  A backdrop of information is provided below:

​The City is mandated to protect residents and visitors from raiding baboons.

Chacma baboons form part of the Peninsula’s rich biodiversity and they play a potentially significant ecological role in the Cape Floristic Region.

Under current management programmes, the Peninsula baboon population is growing steadily and is neither endangered nor under threat.

The raiding and dispersing of adult male baboons is a natural phenomenon of young adult males who choose to leave the troop in search of their own territory.

Over the past decade a dedicated group of baboon-interested individuals have worked closely together under the umbrella of the Baboon Technical Team (BTT) and Baboon Liaison Group (BLG) to develop raiding and dispersing protocols which manage baboon dispersing and raiding on the southern Cape Peninsula.

Please find below details of the baboon management stakeholder structures for the southern Cape Peninsula.

Meetings to coordinate the large group of interested individuals that work for the betterment of baboon management take place in monthly and quarterly meetings.

We invite residents to get involved in their local Resident's Associations should they wish to become more informed about baboon management.

We also encourage residents in baboon-affected areas to baboon-proof their properties in order to help conserve these animals. Waste management is a large part of baboon-proofing, as ​is removing all fruit trees and vegetable patches​ ​which attract baboons into the suburbs.