Activists and their anthropomorphism remain greatest threat to baboons 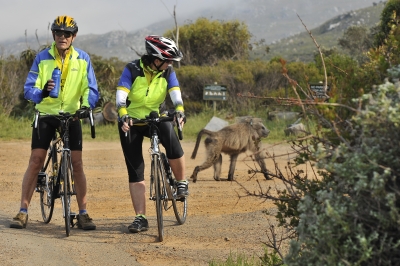 LAST year I visited Cape Town as part of a project funded by the University of Cape Town's (UCT’s) programme for the enhancement of research capacity. All the reading that I had done in preparation for this and other visits to the baboons did not prepare me for what I witnessed first-hand in the Cape.

The baboon troops that I saw (and in February I visited the majority of the troops around Cape Point and urban areas) had taken baboon ingenuity and adaptability to their logical extreme.

Most have reached the point where they are uncontrollable either because they have become dominant to the people living in the area or to the monitors trying to control them and/or the topography of some of the locations made it very difficult to control them.

I place the blame on the position of the baboon activists, who have thwarted the only methods that might have prevented this situation.

Appropriate behaviour is created not just by benefits but by threats about misbehaviour; and these expectations need to be constantly reinforced.

My extensive research on food enhanced baboons (supported by studies from elsewhere) demonstrates the great “benefit” that human food has for baboons and how it changes their behaviour, diet and activity budget making it even easier for them to want to raid. Good evolutionary reasons motivate baboons once they get a taste of the higher quality, larger packages of human foods.

I have tested and witnessed many control techniques in the past 40 years. They all point to the need to make the costs higher than the benefits for the baboons. The baboons should have been aversively deterred from approaching and feeding on human food from the start and consistently so since the first signs of them doing that. How could anyone let a troop sleep on the roof of an apartment building? It is a joke to have monitors walking behind, clapping hands at this point.

I’m not even certain that major deterrent efforts will be effective for many of the troops, but it is the only option now, short of eliminating most or all of the baboons. The epitaph of these baboons will read: “Met an untimely end because activists could not face reality.”

I am scandalised by the publicity campaign mounted by the activists. I care about baboons as much or more than they do. But because I care, I would sacrifice some to save the whole if that is what it takes.

By contrast, activists seem to only care about how “the humans” feel about baboons. They seem unable to take the baboons’ point of view or get out of their particular (and in the context of the rest of Africa, peculiar) ethnocentric opinions about animal welfare.

The current baboon approach advocated by “activists” is unsustainable and in my mind, unconscionable. This is made worse by the clear hypocrisy of the outcry of some of the same people who practised deterrence in the past.

It would have worked if it was done well and consistently and continually. Sadly, it was not.

If there were to be a trial for the “murder” of specific baboon males, I would testify as an expert witness that the very same people bringing the charges are the ones who should be on trial because it was their objections that prevented methods that could have saved these baboons.

The future of the Cape baboons is being endangered by the very people shouting the loudest against the only appropriate methods we have now. If deterrence had been used successfully earlier, there would be no need to kill any baboons today.
The only good outcome of these untoward attacks is that they stimulated the Baboon Research Unit to study what options remain. The unit has used the best science in the service of conservation. They have thought outside the box and should be commended not condemned.

I cannot speak about the other agencies involved but this “anti-science” stance of the activists demonstrates the ignorance that opinion matters as much as evidence. Sadly, as with many conservation issues, it boils down to human foibles: matters of control or money or visibility/credit, which play out regardless of whether conservation actually happens.
I strongly urge the activists to stop this senseless campaign.

Instead, they should use that energy to help support the reasonable efforts that are being proposed. If they don’t, they will have more baboon deaths on their conscience.

Dr Shirley C. Strum is director of the Uaso Ngiro Baboon Project, Laikipia, Kenya, affiliated with the African Conservation Centre, and professor of biological anthropology at the University of California, San Diego.