Cape Town condemns the throwing of rocks at baboons 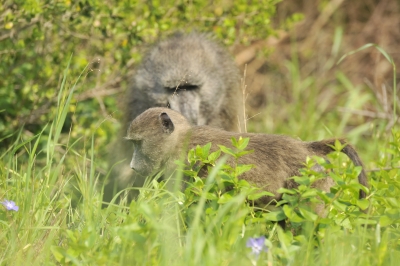 Cape Town baboon rangers found an adult male baboon from the Da Gama Troop, TK43, with what appeared to be a minor injury above his eye on Monday 8 January, 2018.  The animal was disorientated and was taken in for observation.

Baboon rangers questioned the residents and children in the Da Gama area during the week to see if anyone had seen anything.

Local children were ​vague, but indicated that at approximately 8pm on Sunday 7 January, 2018, a teenage Da Gama resident was sighted throwing a large rock at TK43, a 12 year old male baboon from the Da Gama Troop.

The large rock hit the baboon just above the right eye. Whilst the external injury is slight, it appears that ​a more serious internal ​​injury may have caused the ​​baboon ​to lose it's sight​. The baboon also appears to have suffered brain damage. It has been under the care of veterinary staff all week.

Under the CapeNature Conservation Laws Amendment Act, 2000, Ordinance 19 of 1974, the law states that it is illegal to feed baboons; to poison, trap, hurt or kill a baboon by driving with the intent to kill; hunt by shooting at baboons using a pellet gun, catapult, bow-and-arrow, stoning, setting your dog on them, or use a weapon of any kind in order to injure a baboon; or to keep a baboon in captivity without a permit.

All these offences are punishable by law and carry stiff penalties.

CapeNature are investigating the incident.

Residents are encouraged to report any tip-offs regarding this specific incident to the Cape Town Baboon Hotline on +27 71 588 6540.