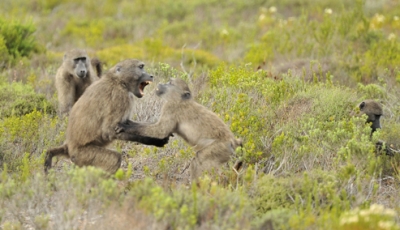 How much do you know about the baboons living on the Cape Peninsula, Western Cape, South Africa?

2) The sex ratio has moved from a high of close to 8 adult females to every male in the late 90's to the current situation where it is regarded as normal, with between 2 and 3 adult females per male. This means more males are surviving to adulthood than at any time in the previous 20 years (Beamish and O'Riain 2017).

3) An independent assessment of current management by a PhD student at Swansea University revealed that the current service provider Human Wildlife Solutions is keeping baboons out of town more than 98% of the time (Fehlmann et al. 2017).

4) The long exposure of baboons to humans on the Peninsula has resulted in their acquiring human pathogens including the whip worm and three viruses (Ravasi et al. 2010; Drewe et al. 2010). Keeping baboons away from humans is good for baboon and human health and safety.

5) Peninsula baboons are neither genetically nor behaviourally unique and do not have special conservation status. Geographic isolation courtesy of your house and mine and the roads we use means the peninsula troops lack genetic diversity but they share a recent common ancestor with baboons in the Cederberg and Overberg regions. Marine foraging is not unique to Peninsula baboons and has been recorded in coastal troops throughout South Africa (Lewis and O'Riain 2017).

6) Peninsula baboons have the same conservation status as chacma baboons in the Western Cape province and are classified as least threatened in the latest red listing (Hoffman et al. 2017).

7) Pain aversion using electric fences and paint ball markers has reduced the spatial overlap between baboons and humans and is supported by the NSPCA. This is because it reduces retaliatory killing and injuries that are commonplace when baboons share space with people in residential areas (Beamish and O'Riain 2014).

9) In an attempt to assist dispersal in a fragmented urban environment 15 adult males have been relocated within the Peninsula, 36% of which resulted in the male attaining alpha status in the new troop (Beamish and O'Riain 2017).

10) So successful has the Baboon Technical Team been at realising their goals of a sustainable population with improved welfare and conservation status that they now have to consider methods for curbing population growth (e.g. fertility control).