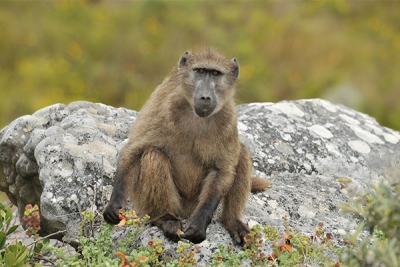 Baboons are considered by many South Africans to be vermin.

And in some provinces of South Africa they can be culled without even the need for permission from the local wildlife authority.

It is against this background that the City of Cape Town’s current investment of R12.3 million rand per annum to prevent conflict between humans and baboons and ensure a sustainable baboon population, is truly remarkable.

Baboon numbers have increased by 36% since they were first counted in 1998 and the proportion of baboons killed by residents as retribution for raids is now lower than at any other time in the previous decade.

These were some of the good news stories that Professor Justin O’Riain shared with the Friends of Tokai at their AGM on Wednesday March 13 at the Tokai Library, Cape Town.

O’Riain’s talk entitled “Fences fire and fynbos: peninsula baboons between a rock and a hard place”, summarised the findings of over 15 years of research involving 15 postgraduate students including five PhDs.

O’Riain who is the Director of the newly formed Institute for Communities and Wildlife in Africa at the University of Cape Town says the challenge of working with baboons was the starting point for realising that conflict between people over how to manage wildlife was often greater than that between communities and wildlife.

Conflict between humans and wildlife on the urban edge is a global phenomenon O’Riain noted with foxes, racoons, boars, bears and possums all at odds with people over resources. The baboon, O’Riain notes, is undoubtedly the most challenging species to share space with. “They are strong, agile and dextrous which allows them to scale an apartment block and unzip a bag with equal panache. They’re also social and so can learn from each other as they search for new food sources in an ever changing world”.

The problems for baboons began in earnest when people started living sedentary lives on the Peninsula and usurped all the productive low lying lands for growing crops and building houses. We left them the mountain which is exposed to the elements and where plant productivity is poor. Baboons like these high lying areas for sleeping but prefer to forage at lower altitudes where the deeper soils sustain more food.

Professor O’Riain says 15 years ago there was a real lack of data on basic issues such as how many baboons there were, what habitat they preferred and whether there was enough food and space for them. In the absence of data every opinion carried equal weight and there were many divergent opinions. Management meetings were consequently dogged by heated arguments that ranged from claims that Peninsula baboons were going extinct to demands that they should all be captured and shipped off to the Boland.

As the research results came in so some of the common myths were dispelled. Numbers were increasing, there was more than enough space for baboons who shunned fynbos for alien vegetation including pines, grapes and acacias. We also learnt that Peninsula baboons are neither genetically nor behaviourally unique and that long exposure to humans had resulted in them acquiring both human parasites and viruses.

Together these findings closed the door on those advocating moving the baboons off the peninsula. Both the baboons and people elsewhere in the country would pay an unacceptably high cost. The authorities thus accepted they were now dealing with a closed population which, with no natural predators and a lot of food attractants on both farms and in the suburbs, would require constant management.

Funding for management increased and this attracted professional companies with training in wildlife management to apply for the role of service provider. So began a new era in managing baboons and encouragingly all the key performance areas improved dramatically. Baboons spent less time in urban areas and so there were fewer injuries and deaths attributed to residents seeking retribution for raids.

But what to do with baboons that could not be deterred using non-lethal methods of electric fences and field rangers armed with paintball guns? Following input from international primate experts and wildlife managers the decision was taken to include a lethal component to management for baboons that do not respond to non-lethal methods.

Importantly this decision was supported by the NSPCA who having seen the confirmed incidents of poisoning, shooting, vehicle collisions, fights with dogs and blunt trauma injuries accepted these as guarantors of compromised welfare for baboons frequenting urban areas.

An independent study by Swansea University student Gaelle Fehlmann revealed that the current service provider (Human Wildlife Solutions) was succeeding in keeping baboons out of urban areas for >98% of the time. This is a phenomenal success and suggests that the City of Cape Town’s investment is improving not only the welfare but the conservation status of baboons by keeping them in natural land and in so doing improving the lives of residents living on the urban edge and their property prices.

There is still an enormous amount of work to be done says O’Riain including improved legislation to get serial offenders like the SA Navy to clean up their act and stop attracting baboons to their shockingly managed residential properties and waste areas. More education is also essential as is the auditing and improvement of all properties that attract baboons into urban areas.

O’Riain finished his talk with an account of the 2015 fire that killed 12 baboons and injured a number of others. Baboons prefer the plantations to fynbos and slept in the trees every night. This proved to be a costly habit as these exotic trees literally exploded into flame as the fire swept through their sleeping site, trapping baboons in the upper branches. It was remarkable that so few died in retrospect says O’Riain.

Further surprises were in store with the baboons presented with a bonanza of food after the fire. The pine trees released their seeds in response to the fire which provided an extensive carpet of nutrient dense food that required very little effort to process having been released from their cone fortress. Stress levels a month after the fire were lower than for the same time in the previous years and their nutritional status had improved.

That is baboons for you O’Riain said as he wrapped up – they can adapt to just about any disturbance which explains why they are one of the few primates that are still widely distributed throughout Africa. Cape Town is leading the way in managing wildlife on the urban edge and the world is taking note and learning from our successes. The main challenge for baboons and other wildlife is conserving the remaining low lying areas and densification along existing nodes is clearly important in realising this goal.

Talk by Professor Justin O'Riain, Director, Institute for Communities and Wildlife of Africa, University of Cape Town to the Friends of Tokai, March 2018, Cape Town.