Annual Count for the Managed Baboon Population on the Cape Peninsula 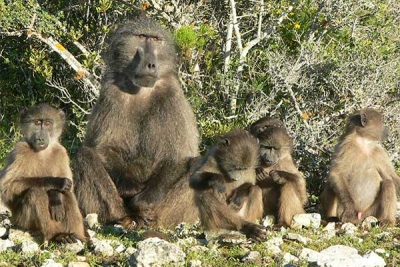 Human Wildlife Solutions (HWS) was first awarded the tender to manage the baboons on the Cape Peninsula in August 2012. As part of the management and monitoring programme, an annual count of the managed baboon population is a requirement by the City of Cape Town.

This report is compiled on behalf of the City of Cape Town by the service provider, Human Wildlife Solutions.

From 2012 till 2015, the annual count was contracted to and conducted by Ms. Esme Beamish of the Baboon Research Unit, University of Cape Town.

During this period the count was conducted during November to December each year. During these counts Ms. Beamish was often assisted by HWS staff.  As of 2016, HWS took over the responsibility of conducting the count through extensive surveys.

Counts were also conducted in May and June to accommodate the end of each tender year in line with the City of Cape Town’s financial cycle. This report will therefore show the synopsis of the count data for 2016 – 2018, and a detailed breakdown for the population as of the end of June 2018, per the new tender requirements.

In 2016 and 2017 only total counts were conducted without age class details. This report is only reporting on the methodology used for counts and the numbers recorded. It does not report on any population trends or provide any explanations for numbers increasing or declining. For those detail please see HWS monthly and annual reports.

Methodology
The count data consists of a total count, which means that each individual is counted, and it is therefore an enumeration of the whole managed baboon population. Within each baboon troop, the troop structure is broken down into the different age and sex classes.

The following categories are used to determine the different age classes:

Counts are conducted by two senior managers (each with at least three years field experience with baboons), with both observers counting the individuals at the same time. The field manager on duty for that troop assists with the count.

Binoculars are used to ensure accuracy in identifying individuals. A video camera is also set up to record the movement of the troop passing a predetermined point. The video recording assists as a tool for verifying numbers and troop structures because the recording can be replayed at a later stage.

One observer is dedicated as the scribe writing down the age and sex classes as called out by the senior spotter. Troops are counted at least twice to ensure accuracy and each count takes a minimum of four hours to complete. If the counts do not concur, additional counts are made until the team is confident the count is accurate.

Sometimes neighbouring troops overlap while foraging. In these cases, counts are abandoned until such time as the troops are clearly separated – usually at a later date. 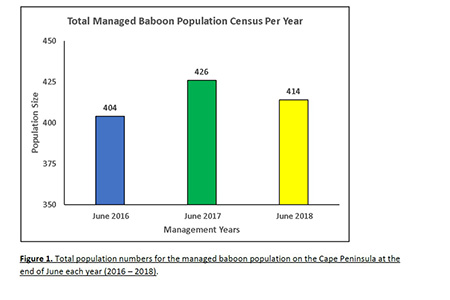 From 2016 to 2017, the total managed baboon population grew from 404 individuals to 414 individuals. However, from 30 June 2017 to 30 June 2018, the population declined by 12. The 2018 count does not include the numbers for the Plateau Road (PR) Troop, as they were not counted in the previous years. The PR Troop was counted during the 2018 count and is included in the 2018 breakdown, but not included in the total managed troop count, because it is not considered a managed troop. 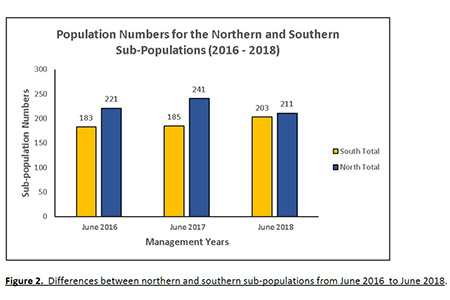 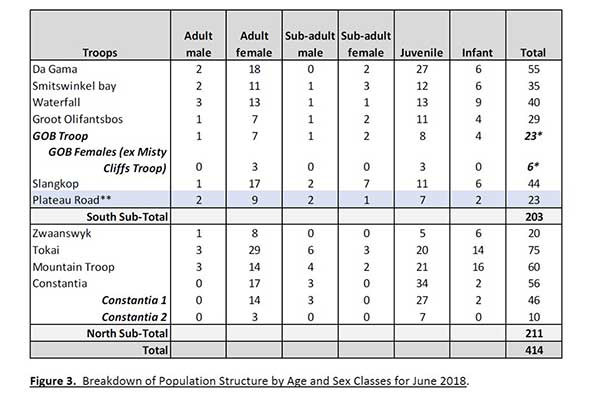 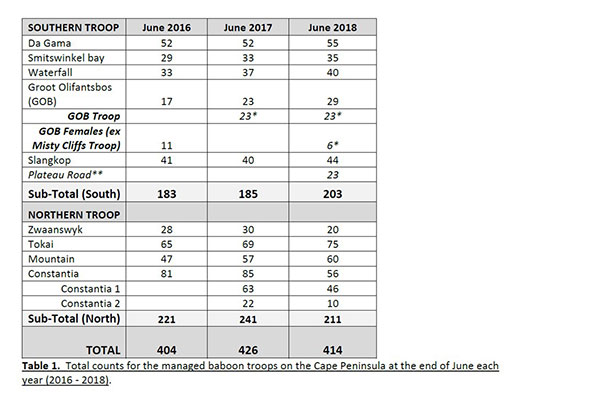 *The Misty Cliffs individuals have been included in the GOB Troop totals since December 2016.

**Plateau Road Troop’s details are included in this detailed breakdown, but the total for the troop has not been added to the other troop totals because there are no comparative data for the previous two years.

For the full report ... including graphics and tables ... download the report below...