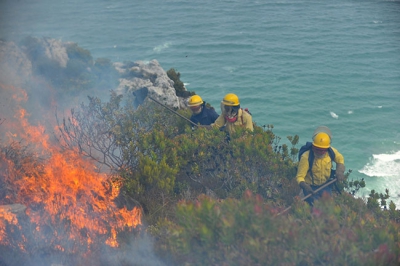 The Baboon Technical Team has issued a Situation Report Update on the Northern Troops as @ 17h00, Tuesday 3 March, 2015.

The 405 baboons in ten troops managed by the City are, so far, unscathed by the Cape fires. The City of Cape Town and Baboon Technical Team continues to watch the fast evolving situation closely.
Over 60 baboon rangers from City of Cape Town’s service provider, Human Wildlife Solutions, manage the ten troops which are divided into three management regions.

The fires described this morning, by the media, as “dancing towards the Tokai forest”, will only be a threat to the baboons in the Tokai region if they are not brought under control.

Last night (Monday 2 March), all four troops in the Northern Region (222 baboons) instinctively moved down the slopes of Table Mountain National Park to below Level One and slept safely in the following locations:

Has the fire affected foraging areas?

Has the fire affected foraging areas?

Will the fires affect the baboon foraging sites going forward? Much depends on the extent of the damage – which can only be assessed after the fires have been extinguished.

If the Tokai forests are badly burnt, then yes, a food source for the Tokai and Zwaanswyk Troops will be affected.  There will be less foraging for the baboons and the potential for raiding will increase.

However, the impact will be short term.  Research has shown that the fires stimulate plant growth and as soon as the first rains arrive, bulbs will be easier to find and the foraging will be even better than it is at present.

Table 1. Population data for the ten managed troops on the Cape Peninsula.