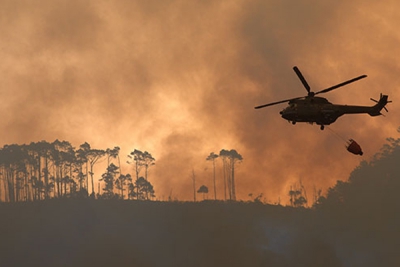 The baboons in the South East Region and South West Region are unaffected by the fires at this stage.

The first assessments of the four troops in the Northern Region (222 baboons) took place this morning, Thursday 5 March.

All baboons in the Zwaanswyk Troop (30), Mountain Troop (47) and Constantia Troop (76) appear to be safe.

The latest animal count in the Tokai Troop, as conducted by the University of Cape Town Baboon Research Unit, indicate that there are 73 baboons in that Troop.

During the initial assessment of the Tokai Troop, it was found that eight baboons had injuries which appear to be inflicted by fire.

The injuries to an adult female baboon were so severe that the BTT, assisted by animal welfare representatives and two veterinarians chose to dart and euthanase the animal on humanitarian grounds.

Medical staff, BBT members and rangers will continue to assess the Tokai Troop.

The following time-line regarding the fires and the Tokai Troop is as follows:

We would like to thank BTT members, baboon rangers, animal welfare professionals and firefighters for all their assistance today in getting baboons to safety.